For the good of his people, the Dwarven King Khazas sacrificed his immortality to rule among them in the wintry fortress of Khadassa. This selflessness is a crown virtue of the Dwarven race, and to have one as a friend is worth more than several lifetimes of fortune. Believing peace is a product of strength, the Dwarves seek not an empire, but to increase their mastery in smithing, the arcane as well as battle. Their compact form is rarely mistaken for lumbering stiffness, as their reputation in all types of conflict is widely established.

Few races can so intimately trace history back to the moment of their creation. Yet, so few gods were like Khazas of Oldassa and so few races show the fealty of his Dwarves. For a lone celestial to bring forth a new race is not unheard of; even among those now on Terminus, such ancestry exists in some number. But no other creation has remained so united with their creator as the Dwarves are to their king. And no other celestial has so stewarded their creation as he, forsaking even his own immortality to lead them as their king..

“In the very beginning, it was Khazas who brought together what the Dwarves call The Balanced Pair. This would become the seed of the Dwarven people.

In one hand, he held a fragment of stone from the heart of Coldark Peak, the mountain he himself shaped to be the throne of the Triumvirate. In the other hand, he held a shard of the Ice of Ry’Fel, which she gave joyfully to him, willing him to add its life to the Dwarven people. Lock, Ehn and Hammur were all present, giving their approval. With perfect balance and pressure, Khazas pressed Coldark’s fragment and the Ice of Ry’Fel into each other, until the resonance and power created by the fusion shook Oldassa’s oldest foundations. Then in a moment, the first Dwarves opened their eyes to see the Dwarven Father.

Of all the Pantheon, only Khazas lingered there with them. He stayed with the Dwarves for many days - teaching them to care for themselves, warning them of Oldassa’s Deep Winters and speaking freely with them.”

But there existed an old, great rift in the Triumvirate of Three, the ruling Pantheon of the Dwarves. Rhazik (called ‘the Rageful’) longed to vye against Khazas, though order was ever preserved under the care of Lock, Ehn and Hammur. These three were endowed with neutrality and upheld the Edict of Balance, which forbid any contest within the Pantheon, neither good destroying evil or evil destroying good. Under this decree, Khazas forged the Dwarves and blessed them with much of his own character, fashioning their frames with deep strength and their minds with keen perception. Thus, throughout Oldassa the Dwarves flourished and there were no rivals alongside them. But Rhazik’s jealousy attended their every triumph like a shadow, ever frustrated when seeking to twist them against Khazas, and his hate aged unquenchable.

Of the many new inhabitants on Terminus, it is believed the Dwarves were the first to arrive during the Age of Isolation. They quickly established a foothold in the southern tundra, naming the area Khadassa, meaning "Khazas’ Reach", after their king. In the same manner he had originally formed the Dwarves, Khazas taught them how to perfectly fuse ice and stone, creating a peerless material in strength and beauty known as Coldark Steel - unbreakable, yet able to be cut thin enough to wear as fabric. With it they built their magnificent Oldassan Citadel in the heart of Khadassa. From that beacon their legacy as champions, mystics, artisans, story-tellers and unfailing companions has flourished, unabated by the storms of change that roll across the planet. Yet, there dwells a hidden terror in their story, one whom even Khazas himself would not dare approach... 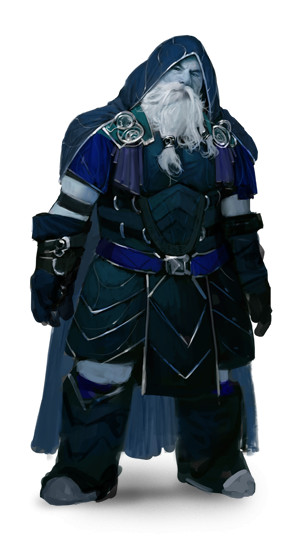